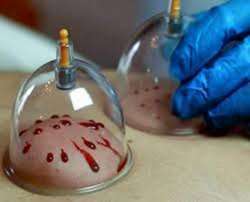 Cupping refers to an ancient Chinese practice in which a cup is applied to the skin and the pressure in the cup is reduced (by using change in heat or by suctioning out air), so that the skin and superficial muscle layer is drawn into and held in the cup.  In some cases, the cup may be moved while the suction of skin is active, causing a regional pulling of the skin and muscle (the technique is called gliding cupping)

The specific origin of Cupping Therapy remains in obscurity – the consensus is that the action of suction has been part of therapeutic efforts throughout human history, migrating with human tribes along migratory routes. These ancient cultures used hollowed out animal horns, bones, bamboo, nuts, seashells and gourds to purge bites, pustules, infections and skin lesions from the body, and many are still in use today. Ancient healers also used Cupping devices to draw evil spirits out of the body and to balance the humors. Earthenware and metal were fashioned into Cupping vessels before the development of glass.