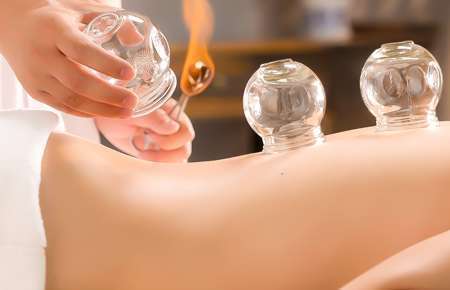 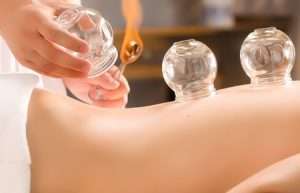 Fire Cupping improves the circulation of blood and lymph. It also improves and regulates the functioning of the autonomic nervous system. Fire cupping involves soaking a cotton ball in medicated liquid. The cotton is then clamped by a pair of forceps and lit via match or lighter. The flaming cotton ball is then, in one fluid motion, placed into the cup, quickly removed, and the cup is placed on the skin. By adding fire to the inside of the cup, oxygen is removed (which is replaced with an equal volume of carbon dioxide) and a small amount of suction is created by the air cooling down again and contracting.

Massage oil may be applied to create a better seal as well as allow the cups to glide over muscle groups (e.g. trapezius, erectors, latisimus dorsi, etc.) in an act called “moving cupping”. Dark circles may appear where the cups were placed because of rupture of the capillaries just under the skin, but are not the same as a bruise caused by blunt-force trauma.